BiotechCorp Chief Executive Officer, Dato’ Dr. Nazlee Kamal said that the MoU also represents recognition of the enhancement that biotechnological tools can provide to industries, the betterment that it can bring to the environment, and the contribution that it can make towards the nation’s bioeconomy.

“This is in line with the implementation of the Bioeconomy Community Development Programme which was announced by the Prime Minister in the recent 2014 Budget, which focuses on the development of idle lands to give rise to increased value addition to agrobased industries, contract farming opportunities, and provide for higher, more secure incomes to farmers,” he added.

“BiotechCorp recognises NAFAS as the perfect strategic partner in this endeavour as their membership of more than 820,000 farmers is capable of creating a huge impact by synergising the strengths of both organisations, namely, access to land, farmers, markets and enabling technologies,” said Dato’ Nazlee.

Agriculture and Agro-Based Industry minister, Dato’ Seri Ismail Sabri Yaakob mentioned that food security is an issue today. Taking the production of rice as an example, he shared that while the demand and consumption of rice is increasing each year, the land available for planting rice has not increase if not shrinking.

“I am very confident that through this programme, by applying biotechnology in the field of agriculture especially in rice production and industrial principles such as vegetable farm, we will be able to sustain the value chain of the agriculture industry and increase the value of farm products while providing some solution to our food security issue,” said Dato’ Seri Ismail.

“It is NAFAS’s core purpose to drive our members towards prosperity and progress. This programme will certainly benefit our participating members not just financially but also in terms of gaining new knowledge as they will be exposed to new and advance bio-based technologies for more efficient farming practises,” he added.

Dato’ Nazlee elaborated that crops like rice, where the application of AgBiotech has resulted in hybrid rice that can produce in excess 13 tonnes of rice per hectare; more than 3 times the average Malaysian yield of 4 tonnes per hectare.

Similarly, the application of AgBiotech and industry best practices in vegetable farming may boost yields by between 3 to 5 times, whilst remaining sustainable.

Riding the wave of 4IR 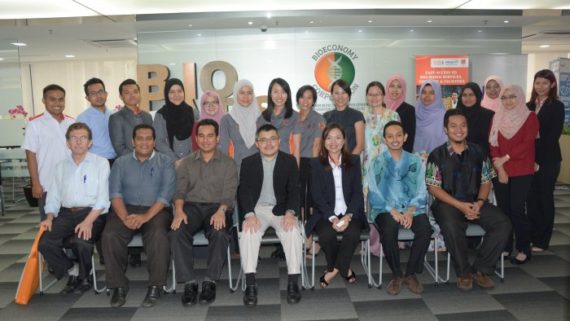 Malaysia Poised to be Key Player in Global Industrial Biotechnology