Home Media Collaboration Between IAP Integrated and MDeC and BiotechCorp 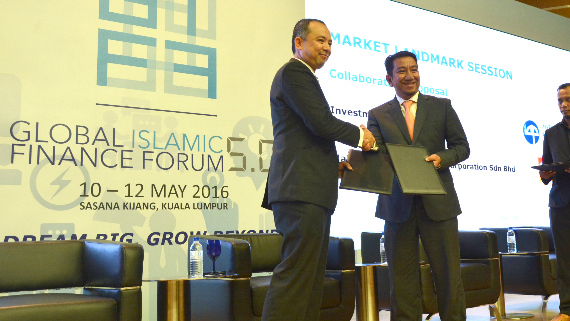 Collaboration Between IAP Integrated and MDeC and BiotechCorp

The exchange of formal documents between IAP with MDEC and BiotechCorp respectively were held during Global Islamic Finance Forum 5.0 (GIFF5.0) at Sasana Kijang, Bank Negara Malaysia today. The event witnessed the exchange of a Memorandum of Understanding between En. Mohamed Izam Mohamed Yusof, CEO of IAP Integrated and Dato’ Ng Wan Peng, COO of MDeC, as well as the exchange of a Collaboration Proposal between En. Izam and Tuan Syed Agil Syed Hashim, CFO of BiotechCorp.

The collaborative framework is expected to strengthen further the IAP ecosystem in respect of continuous pipeline of ventures in niche industries, auxiliary attestation on listed ventures as well as concerted promotional activities in reaching out to the wider coverage of users.
“As we move forward, we urge for more companies to raise funding via IAP – THE avenue of choice for fundraising. The collaboration is opportune as we view that ventures in the new growth areas such as IT and biotech industries stand to benefit from this alternative funding channel in supporting their business growth. Through IAP, the fund raising experience is further enriched (increased access to financing and visibility) by three core elements embedded in the overall IAP architecture namely banking intermediation, fintech and independent assessment by a rating agency,” said En. Mohamed Izam.

“We welcome the collaboration with IAP as we see IAP will help ventures to raise fund and we both have the same mission which is to help the SMEs companies to growth,“ said Dato’ Ng Wan Peng.

Tuan Syed Agil Syed Hashim commented on the Collaboration Proposal, “BiotechCorp is excited with this collaboration because IAP provides an innovative way for bio-based companies to raise funds, compared to normal banking schemes. Funding has always been a challenge when it comes to the bio-based industry but IAP is a significant step that will hopefully make it easier for the companies to get their funding in a shorter amount of time.”

As an avenue of choice for Shariah-compliant investments and fund raising initiatives, IAP provides multi-fold benefits by allowing the diversification of investors’ portfolios, providing new source of funding for business activities, and creating a differentiated product for Islamic banks that presents a new source of income and funding profile.

Since its official launch in last February, the industry witnessed a successful fundraising exercise via IAP by Perak Transit Berhad, an Ipoh-based integrated public transportation company, which marked the first listing commencing 26 April 2016. The company managed to raise RM10 million working capital funding, featuring Bank Muamalat Malaysia Berhad as the sponsoring bank. The exercise garnered an overwhelming demand by various segments of investors, ranging from corporates, cooperatives to retail investors; within a brief 2-week campaign period, signifying the trust on the value propositions offered by IAP. IAP Integrated looks forward to many more meaningful and enriching projects in the near future.