Home Media LAYING THE FOUNDATION TOWARDS AN ASEAN BIOECONOMY

LAYING THE FOUNDATION TOWARDS AN ASEAN BIOECONOMY

The bio-based economy has become an important concept transcending national boundaries. The economic, societal and environmental challenges that we are facing, and the need for us to innovate better ways of living necessitates new developmental approaches by employing knowledge-based cross border strategies.

I am writing in a fairly personal way from what I have learnt by observing many leading bioeconomy-centric countries such as the United States, as well as Europe. The bio-based economy is everywhere. It is an emerging trend worldwide with many countries having already established its own national policies. In Asia, Malaysia is the second country, only after China to have a dedicated bioeconomy roadmap.

The Malaysian bioeconomy in a nutshell has its basis in the primary sectors of the economy, which comprised of agricultural, healthcare, and industrial activities. Bioeconomy Malaysia was officially launched in 2012, followed by the establishment of the Bioeconomy Transformation Programme (BTP), and further enhanced with many ensuing programmes. This transformation towards a bio-based economy means the transition into a more resource-efficient economy centred on the use of renewable biomass that are produced through sustainable ecosystem processes. A greater focus on research and innovation will then provide new tools and bio-based products for us to replace or to reduce the dependency on conventional fossil materials. Subsequently, bio-based strategies will play an important role along with country’s effort to address the myriad of developmental challenges of the 21st century.

While there are already important changes taking place in Malaysia, the participation of ASEAN as a regional organization in Southeast Asia and Asia-Pacific must be considered. The larger ASEAN community, as we know it, is also an emerging regional economic bloc, and its importance has been increasingly recognized by the global community.

Taking the European Union (EU) for example, the region is pushing a lot on the bioeconomy sector, namely businesses based on biotechnology. While some European countries, such as the Netherlands, has developed a bio-based economic policies since 2005, the European Union started an in-deep thinking about bioeconomy and on the 13 February 2012, by launching a new strategy, “Innovating for sustainable growth: a Bioeconomy for Europe”. The key focus is to develop a coherent bioeconomy for Europe, in which specific actions are designed to maximise the impact of bioeconomy research and innovation, including a more coherent policy framework, increase in research investments, development of bio-based markets and better communication with the public.

I specifically highlighted the abovementioned example in order to share the EU bioeconomy experience, one in which ASEAN could certainly emulate. Of course, the EU itself is a model of successful regional integration, with strong economic and political cooperation already in place among its member states. This creates an even more conducive and ready platform to support the growth of new sectors including bio-based, by capitalising on the use of joint institutions for consultation and decision making. Drawing on the experience from our European counterparts, the EU process thus offers an “Intelligent Model” for ASEAN countries, in particular, the way cross border and regional cooperation are being implemented.

Sticking to the context of sustainable development, could it be more beneficial and effective if we are to focus on regional cooperation and to promote the centrality of ASEAN to spearhead the development of the bio-based economy? Having said that, the ASEAN mechanisms since establishments, have proven to be effective and has contributed significantly to solving challenges, implementing policies and driving development in the region. I am optimistic that more could be done to include the bio-based sector in our existing regional cooperation activities.

With Malaysia as Chair of ASEAN Summit 2015, the country will be leading the bloc during a pivotal moment. As one of the five original founding members of ASEAN, Malaysia is now tasked to lead the organization in a year that is filled with important developments in the areas of community-building, economic integration, and regional architecture. Economic integration is at the forefront of Malaysia’s chairmanship, where part of the agenda will center on the future of the integration of the ASEAN Economic Community (AEC), with one of three pillars of the AEC aims to create a single market and production base for the region.

For that reason, 2015 is a year of opportunities, and in line with the ASEAN theme, the Ministry of Science, Technology & Innovation (MOSTI) and BiotechCorp is playing host to BioMalaysia & ASEAN Bioeconomy Conference & Exhibition 2015. Capitalising on Malaysia’s own unique position in Southeast Asia and the 600 million-strong ASEAN community, this year’s event serves as an important platform for BiotechCorp to build the foundation needed for an ASEAN Bioeconomy initiative.

Without a doubt, addressing the international dimension of bioeconomy of this scale will be an ambitious agenda but nonetheless a laudable goal. It will be a massive task yet Southeast Asia have the potential to become Asia’s biotechnology and bioeconomy hub. Malaysia, for instance offers world-class infrastructures, as well as a business-friendly, legal and regulatory environment. The country is also strategically located and is an open gateway to many major markets in Asia Pacific. The ASEAN region as a whole has strong history and tradition of scientific excellence and relatively low cost of scientific work and so serve as a conducive platform for the introduction of innovative high technology and value-added bio-based products, activities and services. With its professional talent pool of highly skilled and educated workforce, reliable and flexible, the region offers another layer of opportunity by serving as a frontier to the larger Asia Pacific market.

BioMalaysia and ASEAN Bioeconomy theme of “Biodiversity to Wellness” also recognised the fact that the ASEAN region is biologically rich, with over 20 percent of all known species of plants, animals and marine organisms can be found in the region. A case in point, if supporting the growth of a nutraceuticals and supplements industry is the goal for a successful regional bioeconomy, then having ample access to a diversity of raw materials would be most beneficial, and one way of expanding the wellness sector would be through partnerships between countries within ASEAN. In this regard, ASEAN members could start sourcing raw materials from one another, and even to explore the potential for expanding the consumer market for value-added products beyond its own borders.

Putting it all into perspective, from the supply of raw materials to expanding market access for bio-based products, from having a common policy framework to building collective instruments for an ASEAN bio-based sector; some major efforts will be needed over the next few years. Then again, I see this upcoming BioMalaysia and ASEAN Bioeconomy Conferences at the Putra World Trade Centre from 17 – 19 August 2015, held in concurrent with Malaysia’s chairing of the ASEAN organization, a good deal for networking and for laying the foundation and groundwork that are required to realise the eventual possibilities of a greater and more prosperous ASEAN. 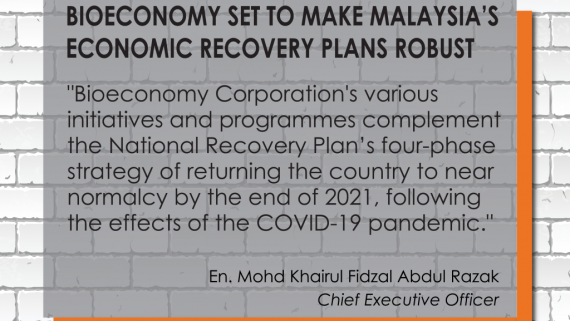 Agriculture at a crossroad – making that quantum leap