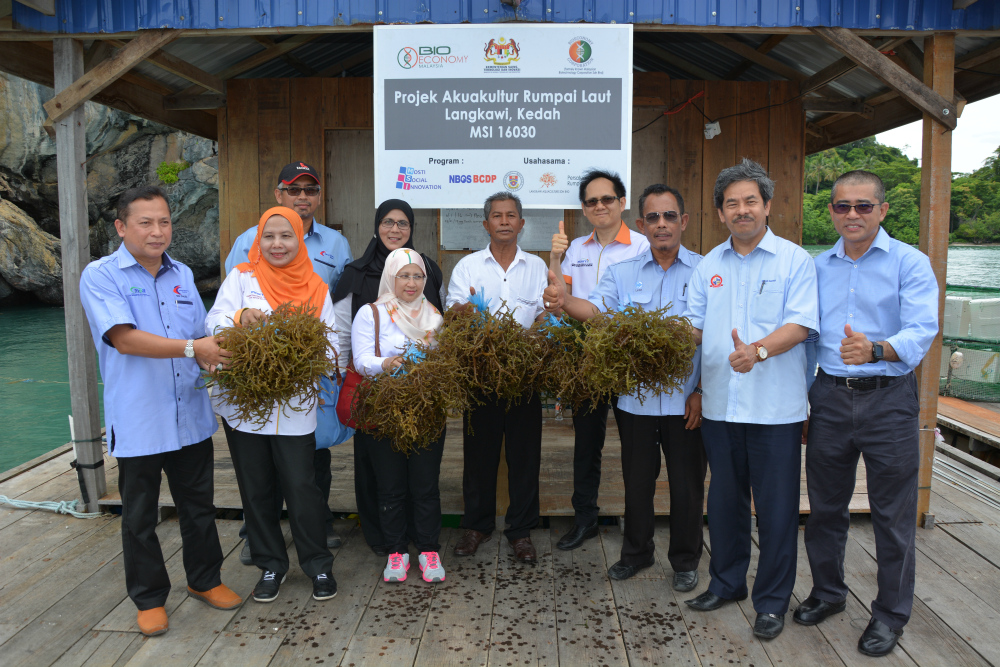 Langkawi, 25 May 2017 – Malaysian Bioeconomy Development Corporation (Bioeconomy Corporation, formerly known as BiotechCorp) is implementing Bioeconomy Community Development Programme (BCDP) initiative in Langkawi, with participation from the local community and supported by the Ministry of Science, Technology and Innovation (MOSTI). The Seaweed Aquaculture Project in Pulau Gasing, Langkawi is part of the Bioeconomy Community Development Programme (BCDP), which is run by Bioeconomy Corporation and endorsed by the National Blue Ocean Strategy (NBOS). The project is implemented with funds received from MOSTI’s Social Innovation Programme (MSI) and is carried out in collaboration with Langkawi Aquaculture Sdn Bhd (LASB) an anchor company which has been involved in commercial seaweed farming since 2013. The project currently involves 20 members from the Persatuan Pengusaha Rumpai Laut Langkawi (Persatuan) who now have the skills to farm, maintain and increase seaweed production for commercialisation by applying the latest farming techniques provided by LASB.

Deputy Secretary General of MOSTI, Prof. Madya Dr. Ramzah Dambul who represented Minister of MOSTI, Datuk Seri Panglima Wilfred Madius Tangau, said that the matured seaweed will be propagated and bred in Pulau Gasing, before being expanded to other parts of the island with the involvement of more participants. He hopes that this initiative will turn Langkawi into a hub for seaweed production in the foreseeable future. “At full capacity, the area has the capacity to house 100 cages of seaweed, with maximum capacity of 700 kilograms per cage. Thus, the Persatuan members can generate income of more than RM3,000 a month. Apart from seaweed, fish and other marine life can also be bred in breeding cages as farming alternatives to generate additional income,” he added.

Acting Chief Executive Officer of Bioeconomy Corporation, Tuan Syed Agil Syed Hashim said that the organisation has been collaborating with both stakeholders and industry players to develop the seaweed industry in Langkawi, where the environmental conditions such as water temperature and salinity level are conducive for farming. “BCDP is about making agriculture and farming a more knowledge intensive industry. We believe the participants of this project can spread their knowledge and skills to other Persatuan members as well as surrounding communities. This not only creates a highly skilled and competitive farming community in Langkawi, but also has the potential to transform the seaweed industry to a larger and more profitable commercial scale,” he said.

In the project, participants also utilise LASB’s proprietary technology, the ‘Langkawi Integrated Farming Enclosure’ or LIFE which utilises a more flexible and environmentally-friendly farming technique as compared to other conventional cages. LASB currently markets raw and dried premium seaweed catering to many international markets. Through the BCDP arrangement, LASB will be guaranteed a consistent supply of raw seaweed for its subsequent processing into Carrageenan that will be marketed worldwide. The potential for export is promising in Asia because Carrageenan serves as a thickener in many products including in toothpastes, lotions and facial cleansers, and is a dietary alternative to gelatin.

Bioeconomy Corporation has collaborated with other BioNexus status companies with the participation of rural farmers in the MSI-BCDP arrangement to enhance rural development, including with Bioalpha East Coast Agro Sdn Bhd to grow the traditional herb ‘Kacip Fatimah’ in Ledang, Johor, and with Frais Fungi Sdn Bhd to boost oyster mushroom production in Nilai, Negeri Sembilan. As of May 2017, 34 projects involving over 2,700 participants have been implemented under BCDP in various stages. These projects are expected to have an impact on more than 12,150 lives.