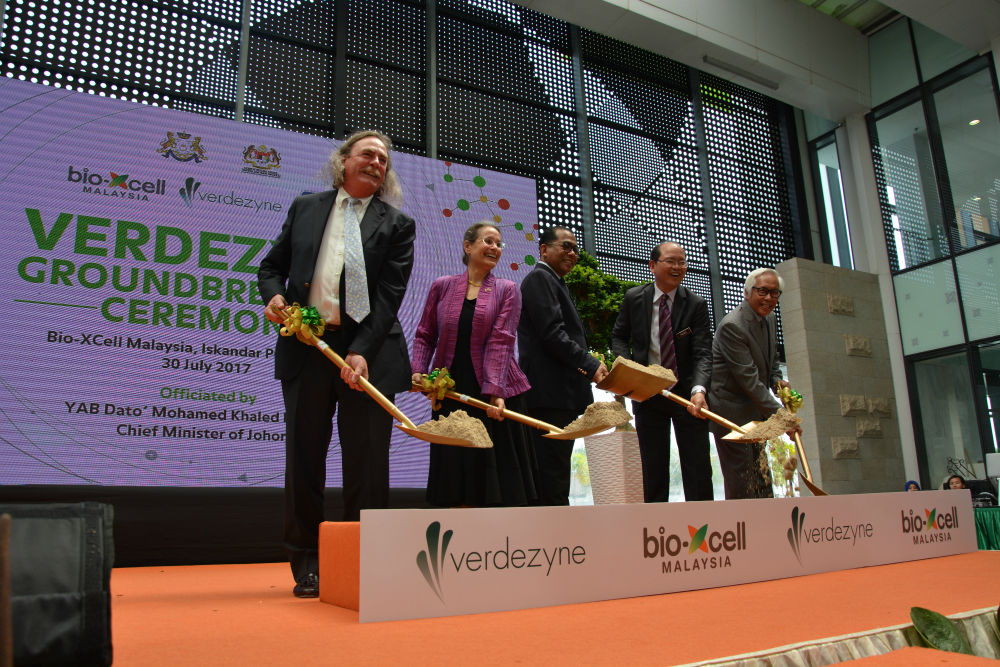 CARLSBAD, Calif. and & KUALA LUMPUR, Malaysia, July 31, 2017 /PRNewswire/ — Verdezyne Inc., a synthetic biology company producing biobased chemicals, announced today that a groundbreaking ceremony was held on July 30th for its VerdePalm plant, Verdezyne’s first commercial-scale renewable chemicals manufacturing facility, at the Bio-XCell premier biotechnology and ecosystem park in Nusajaya, Iskandar, in southern Malaysia. The new facility is designed to produce biobased long chain diacids via fermentation of Verdezyne’s proprietary yeast, which has been engineered to use non-food biomass to produce high value chemicals. The first product produced at VerdePalm will be dodecanedioic acid (DDDA), a 12-carbon diacid that is a component of many consumer products currently made from petroleum. DDDA is a main building block of FerroShieldTM. Verdezyne’s nitrate-free dibasic acid mixture used in a variety of corrosion inhibitor applications.

The groundbreaking ceremony for the VerdePalm plant was co-hosted by Verdezyne and Bio-Xcell Malaysia. Attendees included Chad Waite, Chairman of the Verdezyne Board of Directors, His Excellency Datuk Seri Panglima Wilfred Madius Tangau, Minister of Science, Technology & Innovation, Her Excellency Kamala Shirin Lakhdhir, US Ambassador to Malaysia, other Malaysian dignitaries and representatives from Verdezyne’s partners, The Guest of Honor, YAB Dato’ Mohamed Khaled Nordin, Chief Minister of Johor, presented the Officiating Speech.

The VerdePalm plant is expected to be completed in 12-18 months. VerdePalm will be the world’s first bio- based plant for DDDA production. “Importantly, the starting yeast will be made from the spent biomass that results from palm oil processing,” Waite stated. “Crude palm oil and palm byproducts, as well as other plant- based raw materials, will be used to produce approximately 6,000 metric tons of industrial grade DDDA each year. Verdezyne’s technology will enable a very low-value by-product of palm oil processing to become a high-value “green” product that reduces the use of petroleum.”

“We are excited that a product made by Verdezyne and our Malaysian partners will be shipped around the world to be used as an alternative to the typical petroleum-derived intermediate chemicals,” said E. William Radany, Ph.D., President and CEO of Verdezyne. “The VerdePalm plant is part of our comprehensive strategy of expansion into Asia, and represents a major step toward our goal of replacing petroleum-derived chemicals with renewable drop-in replacements,” he noted.

“Malaysia is proud to host Verdezyne’s first commercial manufacturing plant, which is located at the Malaysia Bio-XCell park. I believe the eco-system provided by the park will be an excellent fit for the VerdePalm facility. Malaysia will continue to commit to the ongoing advancement of biotechnology in the country. The groundbreaking ceremony signifies Verdezyne’s readiness to work with Malaysia and marks another milestone in our quest to add value to the palm industry using biotechnology as a catalyst,” said Zainal Azman B. Abu Kasim, Senior Vice President of BioIndustrials, Bioeconomy Corporation in Malaysia.

DDDA is a key component of FerroShield, which can be used in numerous corrosion inhibitor applications including metalworking fluids, engine coolants, metal cleaners, die cast release agents, and aqueous hydraulic fluids. “Marketing of FerroShield was launched in February of this year,” Dr. Radany added. “The rust inhibition industry is in need of a high-performing dibasic acid mixture that can be easily incorporated into existing customer formulas. We foresee strong demand for FerroShield in a number of countries in Asia and Europe, as well as in the U.S. and Canada.”

INNOVATION AND VALUE CREATION IN THE BIO-BASED ECONOMY