Home Media BIOECONOMY DAY IN SABAH: A DAY TO HONOUR OUR CHAMPIONS IN THE BIO-BASED ECONOMY

BIOECONOMY DAY IN SABAH: A DAY TO HONOUR OUR CHAMPIONS IN THE BIO-BASED ECONOMY

We need to recognise the contributions of the personalities, companies and agencies who devoted themselves to the development of bioeconomy. To do that, the idea came that we should have a Bioeconomy day to honour our champions in the bio-based economy.

We are now at the dawn of a new global economic paradigm, and more needed to be done to move the bioeconomy agenda forward. Sabah for example, has the competitive advantages, given its abundance in biological resources. The state holds large untapped opportunities, which can be leveraged on to expand into high potential economic activities in the bio-based sector. Harnessing its full potential will require efforts in scientific and technological innovation, supported by stakeholders at all levels.

The decision to champion the Bioeconomy Day in Sabah follows the successes and overwhelming response received from the first edition in Kuala Lumpur. This time, Bioeconomy Day took place on the 11 November in Kota Kinabalu, and was officiated by the Honourable Minister of Science, Technology and Innovation, Datuk Seri Panglima Madius Tangau. There are many other outstanding individuals recognised for their efforts and contributions towards the development of the bioeconomy in the state. A list of notable personalities include Datuk Dr Mohd Yaakub Hj. Johari, President of Sabah Economic Development and Investment Authority (SEDIA), Datuk Dr Pang Teck Wai, CEO of POIC Sabah, and Datuk (Datu) Basrun Hj. Datu Mansor, General Manager of Koperasi Pembangunan Desa.

There are also support coming from many public institutions, agencies and private companies. This include but not limited to, the Ministry of International Trade and Industry (MITI Sabah), the Malaysian Agricultural Research and Development Institute (MARDI Sabah), Malaysia Debt Ventures Bhd, SEDIA, the Sabah Economic Planning Unit, Suruhanjaya Koperasi Malaysia Negeri Sabah and Universiti Malaysia Sabah. Our private sector supporters are the Palm Oil Industrial Cluster (POIC Sabah), Koperasi Pembangunan Desa, and a host of many bio-based and BioNexus companies from the healthcare, agricultural, and industrial sub-sectors, including Flora Bee Hive Enterprise, Green World Genetics, and Sabah Softwoods to name a few.

The Bioeconomy Day in Sabah revolves around the idea of a sustainable economic growth, economic development via utilisation of bio-based resources, and through Science, Technology and Innovation (STI), to capture higher value-add economic activities. The overall economic aspect would mean elevating the household income of the community, addressing disparity of income as well as increasing employment opportunity.

In the bid to continuously attract strategic investments into the state, the Sabah Bioeconomy Day also highlighted the current achievements of the Bioeconomy Transformation Programme (BTP), and the Bioeconomy Community Development Programme (BCDP). The BTP comprises of developmental projects which contribute towards “Capital Economy” focusing on economic development, while the BCDP contributes to the “People’s Economy”, that is societal development. Both programmes have significant role towards the successful implementation of the 11th Malaysia Plan. The National Economic Blueprint, for 2016 to 2020, is the final leg of Malaysia’s 5-year economic plan which focuses highly on people’s wellbeing and high income achievement through inclusiveness, innovation and sustainable development. Sabah could certainly capitalise on the bio-based sector to unlock future economic growth and to maintain the state competitiveness. The Bioeconomy Day in Sabah provided an avenue for all to participate in this new economy.

Nationwide, there are a total of 48 BTP project to date, ranging from the production of industrial bio-outputs to biochemical and biomaterials, from bio-based farm-inputs to high-value bio-ingredients and food varieties, and from bio-pharmaceuticals to stem cells and regenerative medicines.

I am pleased to share that several high impact BTP projects in Sabah, have been attracting significant investment to date. Genting Plantations Bhd has provided huge investment towards the building of a bio-refinery complex in the Palm Oil Industrial Cluster (POIC). I recall in September last year, the company has been awarded the “Bioeconomy Prime Mover” recognition in New York, during the 8th BIO-IAP meeting for its role in supporting the Bioeconomy. The project is anticipated to bring in a total of MYR1.7 billion, contributing to a Gross National Income (GNI) of MYR2.1 billion by 2020. Other significant investment captured by the BTP include Sunlight Inno Seafood’s effort in developing a fully integrated aquaculture facility, and Sabah Softwood setting up of a biogas power generation plant at Kapilit Palm Oil Mill.

The Bioeconomy Community Development Programme (BCDP), is an important economic programme, and a major component for rural bioeconomy in Sabah. It will create significant impact to the local community. Through the BCDP, BiotechCorp is looking at new and innovative business model which will eliminate the role of middlemen and promote fair trade. Additionally, by way of implementing the cooperative contract farming business model, the BCDP presented an opportunity for generating additional income to the farmers.

Capitalising on Sabah’s abundant natural resources to produce value-added food and specialty products based on botanicals, aquatic plants and animals, pipeline BCDP projects in Sabah include Stevia production, mushroom cultivation, seed production and bee farming in Kimanis, shrimp farming in Pitas to effectively support the development of bio-agropreneurs. The BCDP will bridge the gap between urban and rural areas in Sabah and uplifting the B40 household income by creating income generation and job opportunities for the rural communities. Two notable BioNexus status companies, Flora Beehive Enterprise, and Green World Genetics are now part of BCDP efforts in Kimanis. I certainly hope that the success story coming from these pilot projects will serve as a nucleus that will encourage more BioNexus companies participation in the future.

The clear-cut focus for BiotechCorp at this time is aimed at having more BioNexus companies coming from East Malaysia, and to emphasis more on the Bumiputera development agenda in Sabah and Sarawak. This is due to the simple reason that most BioNexus companies, 261 in total to date, are currently highly concentrated in the central region of Peninsular Malaysia, while the Northern States and East Malaysia has very limited number of bio-based companies plus a lack of understanding of Bioeconomy. BiotechCorp, as an economic development agency for the bio-based economy, will have to work towards addressing this developmental disparity between the regions.

Obtaining the full benefits of the bioeconomy in Sabah will require goal-oriented efforts. This will require leadership, primarily by the Ministry of Science, Technology and Innovation (MOSTI), other related ministries and government agencies, public institutions and also by leading private sector firms. The formula for success is strongly dependent on effective partnerships and collaborations at many levels, across many fields, and with many active participants from the public and private sectors.

Supported by an effective STI policy, strategic directions are set for the application of bio-based technologies to primary production (agriculture), industry and healthcare; to put in place the structural framework required to achieve success such as obtaining regional and international agreements, and cooperation; and to develop mechanisms to ensure that policy can flexibly adapt to new opportunities.

We need to continuously recognise and honour the contributions of personalities in the bio-based economy. The Bioeconomy Day will again take place next year with the hope to see more bio-based products and industry champions emerge to help develop Sabah and the Malaysian economy. At the same time, BiotechCorp will work towards developing a bioeconomy index to chart the overall impact of the bioeconomy in Sabah. This will allow for a more systematic approach to strategy making for positioning the bio-based economy as an important socio-economic contributor to the state of Sabah. 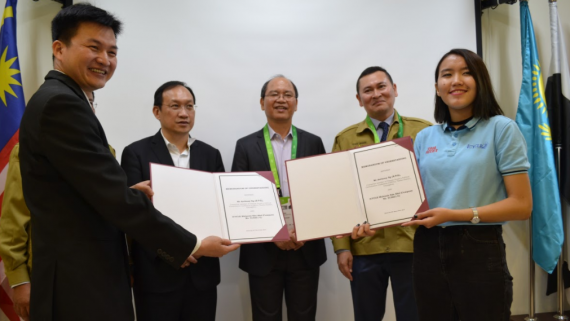