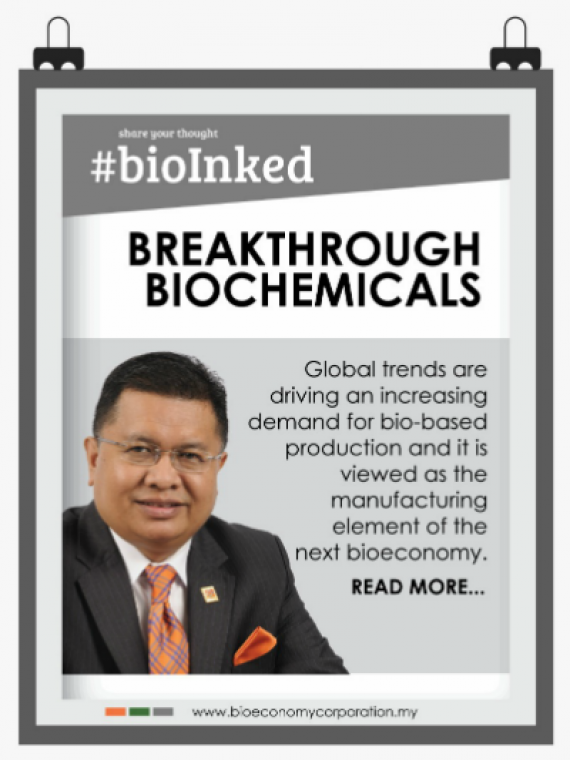 Global trends are driving an increasing demand for bio-based production and it is viewed as the manufacturing element of the next bioeconomy. Specialty chemicals, biomaterials, bioremediation and bioenergy are some examples of bio-based products. The chemical industry is one of the world’s largest industrial sector and is crucial to the growth of the bio-based economy. It converts raw materials such as oil, natural gas, air, water, metals and minerals into thousands of products that range from basic commodities to polymer, bulk, intermediate and specialty chemicals.

Bioeconomy Corporation has been facilitating and supporting a bio-based investment in the specialty chemicals segment. It all began in 2009 at the World Congress on Industrial Biotechnology in Montreal, Canada, where Bioeconomy Corporation facilitated multiple engagements between Malaysia’s palm oil industry players and Verdezyne, Inc. Verdezyne is a California-based biotechnology company that creates a unique collection of proprietary yeast strains.

The engagements were a success as it led to one of Malaysia’s largest palm oil companies, Sime Darby Berhad to sign a collaborative agreement with Verdezyne in April 2014 to acquire a stake in Verdezyne Inc. with an investment worth USD48 million. The signing was witnessed by former President Barack Obama of the United States of America and Malaysia Prime Minister Najib Razak. This was followed by the establishment of Verdezyne Malaysia, who was awarded the BioNexus Status. It is a befitting status for qualified international and Malaysian biotechnology companies that have special access to fiscal incentives, grants and other guarantees by Bioeconomy Corporation.

On 30 July 2017, we will have the privilege to witness the groundbreaking ceremony of the world’s very first commercial plant by Verdezyne Malaysia, called ‘Verdepalm’ located at the Malaysian Bio-XCell Sdn Bhd, Iskandar Puteri, Johor. The plant houses Verdezyne’s novel genetically engineered microorganisms that are able to produce green, clean and cost-effective specialty chemicals from renewable sources such as palm oil. This offers a sustainable alternative to petrochemical-based products.

Once fully operational in 2019, the Verdepalm plant will produce dodecanedioic acid (DDDA), adipic acid and sebacic acid, which are used in a wide range of applications including automotive parts, carpeting, lubricants, coatings, personal care products and nutritional supplements. This would bring about an addressable market exceeding USD50 billion. At full scale, Verdepalm will create multiplier effects and is expected to create 75 knowledge worker employment opportunities, generating an investment value of RM308 million for the project’s first phase and creating a long-term socio-economy growth for the bio-based industry in Malaysia.

Verdepalm will also provide huge opportunities for its potential partners to venture into the downstream production of the palm oil industry, subsequently creating a knowledge based industry and technology advancement in Malaysia’s area of bio-based industry.

In line with the National Biotechnology Policy (NBP), Bioeconomy Corporation will continuously promote and integrate Malaysia’s bio-based resources with biotechnology platforms and engage with industry players to create awareness, interest and foster new investments besides adding value to the bio-based manufacturing industries.

This will have a fundamental impact because biotechnology processes use renewable resources and offer the most promising and innovative approaches towards reducing greenhouse gas emission, landfill, waste water effluents and sustainability of energy resources. Bioeconomy Corporation will also continue to provide facilitation and support to the local industry players to advance from traditional to bio-based manufacturing so they can ultimately become key contributors to Malaysia’s bioeconomy growth.

First Intraocular Lens Manufacturing Facility to be Built in Asean 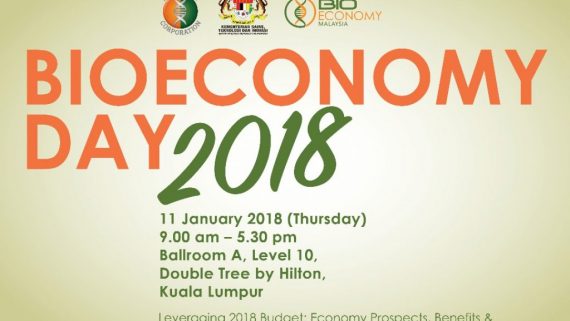